Sometime back in December, my friend Ray presented me with a custom trackable geocaching tag for Bucket. He knew I occasionally took her out hiking and caching with me and thought it was a good idea to make her an official trackable.

I snapped this picture last night after we found our first official cache as a trackable.

When I initially posted this photo on GeocacheAlaska!‘s Facebook page, I never expected the reaction I got. I knew it was unusual to be out hiking with your kittay, as we always get stopped on the trail, but it’s even more unusual to be out caching with your cat. I was contacted by a member from Geocaching HQ for permission to use my photo. I obliged and before long Bucket’s photo was getting hit after hit on their Instagram page. In 24 hours the caching kitty had over 2,400 likes and nearly 75 comments. 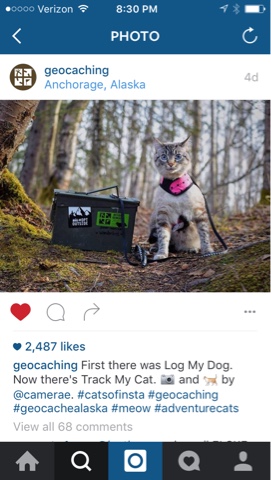 Only the next day her photo was then picked up and featured by another organization – AdventureCatsOrg – where nearly identical results were achieved. 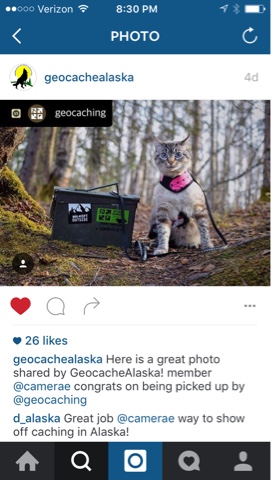 Next, Bucket would like to try and break the internet.