Bosco & I spent the majority of our Monday out in the woods meandering about and playing in the snow. We even took some time to build a snowman at one point, but Bosco enjoys eating snowmen more than he enjoys building them, so that didn’t last long.

We happily spent the day tromping through the fresh snowfall in the woods, before picking up a trail back to the car just in time to meet up with a friend for dinner at my new favorite Thai restaurant in town. After eating more than my fair share of curry I hopped back in the car and headed the direction of home. We were halfway home before I realized I just wasn’t quite ready to call it a day just yet. It had been a long, stressful week and I wasn’t ready to give up the cold, fresh mountain air for the comfort of my couch. I turned the car down a side street and headed for a local park. Bosco, who has also been cooped up inside all week, did not seem to mind my decision as he whined with anticipation as we pulled into a parking space.

As I was walking down the trail tonight, I spotted a moose about thirty feet ahead of us just next to the trail. It was dark out, but the combination of snow and moonlight were enough to guide the way. I dig out my flashlight to get a better look at said moose to see if she’s going to let us go by without incident. Bosco is standing patiently about ten feet out in front of me waiting for a command on what he should do next, when out of nowhere a second moose rushes out of the woods and charges Bosco. In a moment like that, I am grateful for the time and energy I have invested in training/raising my dog. He obeyed my commands precisely and we were both able to walk away from a pissed off momma moose without much incident.
Bosco pretty much loves everyone and everything he meets. Minus Bucket when we first brought her home. That 3 lb kitten was scary as shit, but I digress. Bosco has no problem walking under horses because they’re his friends and last night, with the moose, he was waiting for me to release him from his ‘stay’ so that he could go sniff it’s bum and be instant friends. Tuesday night, just one day after our near miss with the moose, Bosco learned the hard way that while he loves pretty much everything, not everything loves him.

After removing most of the porcupine quills from his face and paws, I discovered more inside his mouth, including one under his tongue, and took him into the emergency vet to be put under to have them pull out the rest and check for any more that we had missed. Thankfully, while they were in his mouth they also discovered a problem with one of his back teeth they were able to quickly correct before it became a major issue that would have resulted in his losing a tooth.
This is him back at home, still doped up on anesthesia and being tended to by nurse Bucket. Never a dull 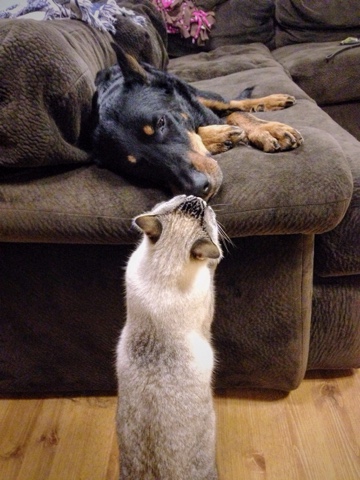 One thought on “Close Calls”