September 9, 2015May 28, 2016
I remember it vividly. I was biking up a hill on a busy street when he called. When separated by as many time zones as we are, living different lives for months at a time, phone calls are a precious thing you don’t pass up.
As cars rushed past, I couldn’t hear a thing he was saying so I detoured into a nearby parking lot. It was on the curb of the post office that I sat when he said to me we needed to talk. As I sat on the cool cement, listening in disbelief to what he was saying. My first reaction was to get mad and when I get really mad I cry. I hate it, but I’ve always been this way and couldn’t help it. The tears started flowing uncontrollably from my eyes.
I didn’t believe him. I wanted to, but for me, the gravity of what he was saying just wouldn’t sink in. He started it with ‘Don’t be mad, but…’ Uh-oh. ‘I need to tell you what I got you for your birthday so you have time to prepare.’ Prepare? He proceeded to tell me, he’s been working on my gift this year for months and that I would soon be joining him in South Korea for a few days.
He’d send me my ticket confirmation as soon as we got off the phone, hotels had been reserved, my time off with work already approved, and the furries already being watched by a friend. My only task was to dig out my passport, pack a bag, and start thinking of some things in and around Seoul I wanted to do.
Much like when he proposed, I though he was joking. While my husband is very loving and kind, he has the same, sarcastic, harassing, button-pushing personality that I do and he is quite good at pulling my leg. Which for the longest time, is exactly what I thought he was doing.
The hardest part now would be knowing I was going to see my husband soon, but remaining patient and calm. There was nothing I could do to speed up the process, but spending some of my birthday money on some new luggage helped ease the tension. 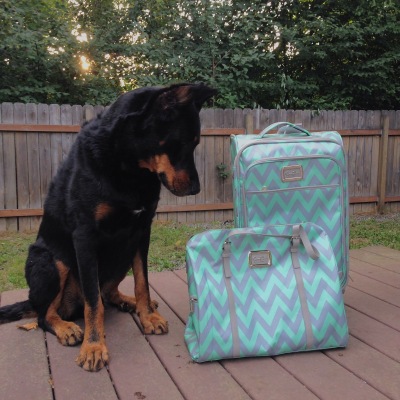 Cally, the same friend who was watching Bosco & Bucket dropped me off at the airport late Wednesday night. My plane departed for Seattle without a hitch. After a short layover which allowed for just enough time to snack on my favorite Ivar’s clam chowder in the Seattle airport, I was boarding in for Incheon Airport in Seoul, South Korea.
The 15 hour flight seemed like only a few hours of movie watching, sleeping, and eating terrible, but much welcomed airplane food. Before I knew it we were touching down. The butterflies finally started settling in as I was handed paperwork to enter the country. As quickly as I could I scrambled through the paperwork, dashed through the terminal, made it through customs with ease, and raced through baggage claim to meet up with the 4 o’clock bus I was trying to catch. The next bus to my hotel wouldn’t be leaving for another 2 hours so I didn’t want to miss the earlier one. With three minutes to spare, I hopped onto my bus bound for the Yongsan Army Base.

After an hour spent winding through the busy streets of Seoul my bus arrived at the Dragon Hill Lodge. Having no cell phone, I checked into the lodge to access it’s wifi, found out Brian was still another 30 minutes away on his bus, and headed to our room. The minutes c.r..a…w….l…..e……d by.
A soft knock on the door was followed by the sweetest kiss and longest hug. I tried to keep the emotions in check, but a few drops of saline fell from my eyes. Both of us exhausted from our travels & Army’s mandatory curfew in the country coming up quickly, we spent the rest of the night at the lodge catching up.
Up early the next morning, we found a taxi to take us to the heart of the city, which conveniently wasn’t far away from where we were staying, and found ourselves at the Lotte Hotel in downtown Seoul. Here, while we waited for our tour bus, we discovered this magical invention. 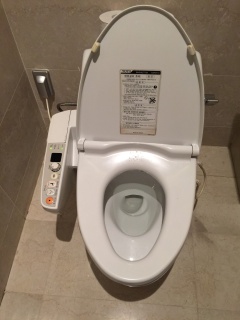 Our entire day was spend boarding busses, but the experience was once in a life time. At each destination we were taught about the history of the Korean people and their land, as well as the devastation that occurred as the country took sides and was divided into North and South. 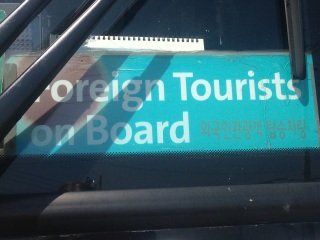 At the end of it all was our true destination. After a release of life was signed we were granted the ability to step inside a JSA conference room inside the DMZ, which spans into both countries, and were allowed to walk a few feet inside of North Korea. We were warned over and over again about the rules, including no food, gum chewing, loud talking, or even pointing. We were only allowed to have camera’s out at three specific locations, and even then, only allowed to point them in very specific directions. Following the rules could literally mean life or death, not just for yourself, but for all the soldiers involved. 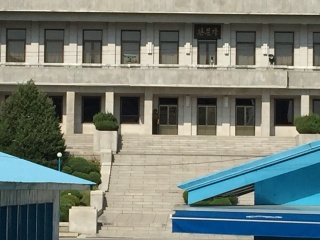 After such an intense first full day in the country together, Brian & I decided to make light of our second day. We headed to Lotte World, an amusement park that can only be described as the Korean’s version of Disney World… A Disney World that’s tripping balls on acid. 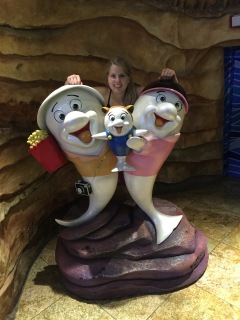 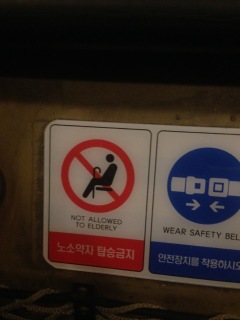 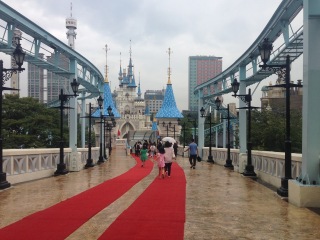 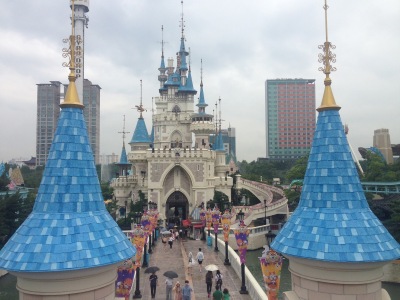 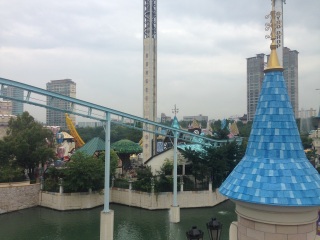 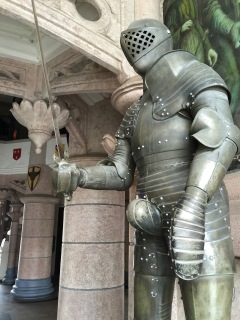 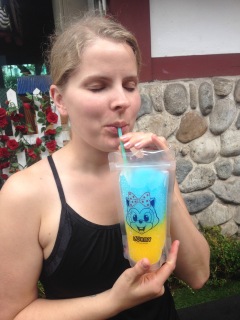 One of my goals while visiting Korea was to make it to a cat cafe. Such a thing would never pass the strict health code laws in America, but the idea of sitting in a coffee shop surrounded by a dozen or so kitties, sounds like a perfect way to spend a rainy afternoon catching up the blog. I guess the one at home on my couch will have to do until America gets it $#!t together. 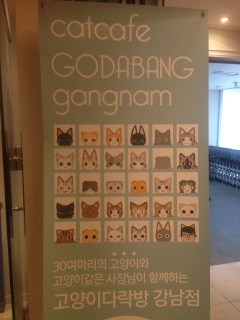 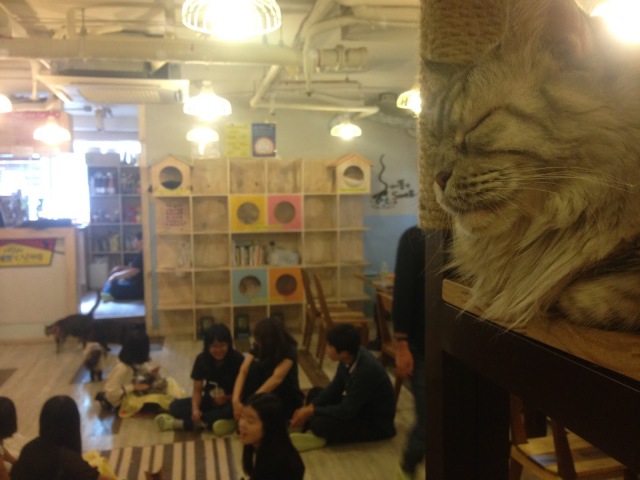 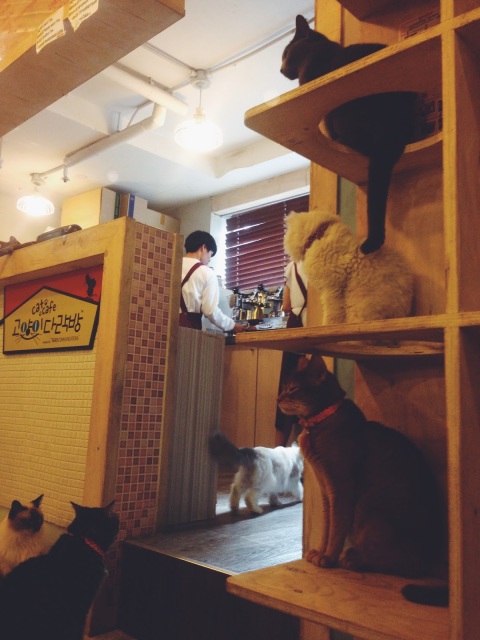 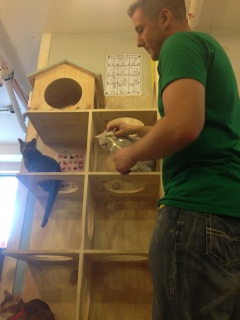 Having a fair amount of time before curfew, we caught a 4D movie. Now there are a lot of similarities between the big city of Seoul and any other large city in our country, but one distinction of the two can definately be found at the movie theatre. Not only is there no candy sold at the counters, the popcorn is (sadly) not doused in the chemical butter, and their snacks are a little, well, weird to this foreigner. 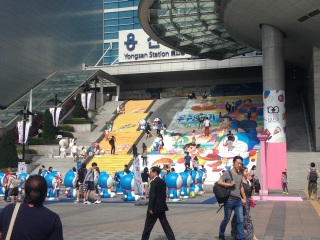 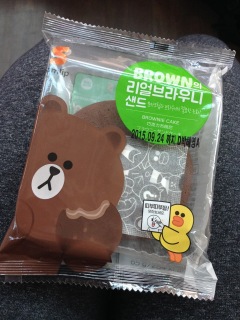 Not completely on vacation like I was, Brian had to spend part of our next morning working on a few assignments for grad school. Once he was finished we meandered down to the Cheonggyecheon – a 7 mile long stream flowing through the heart of Seoul, with a unique history all in it’s own. After recovering Brian’s phone from the stream (oops!), we decided it was time to head for dryer ground. 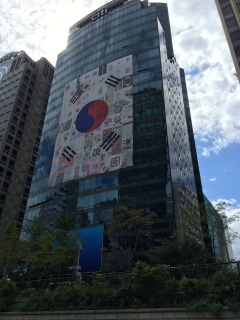 We found ourselves at the Gyeongbukgung Palace and decided to tour the many beautiful buildings on its grounds. 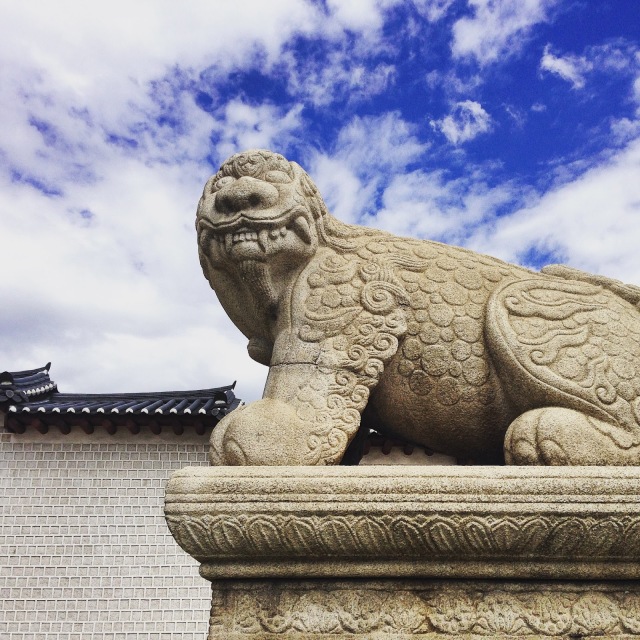 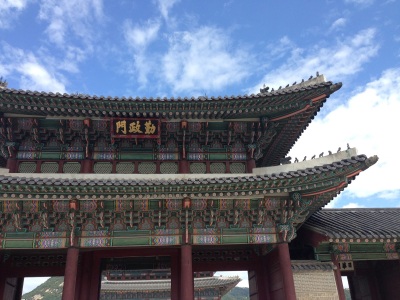 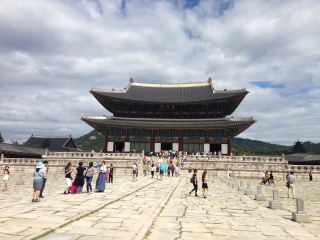 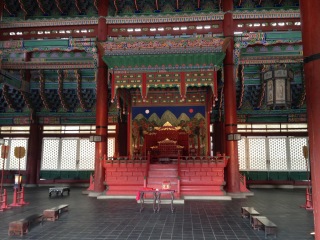 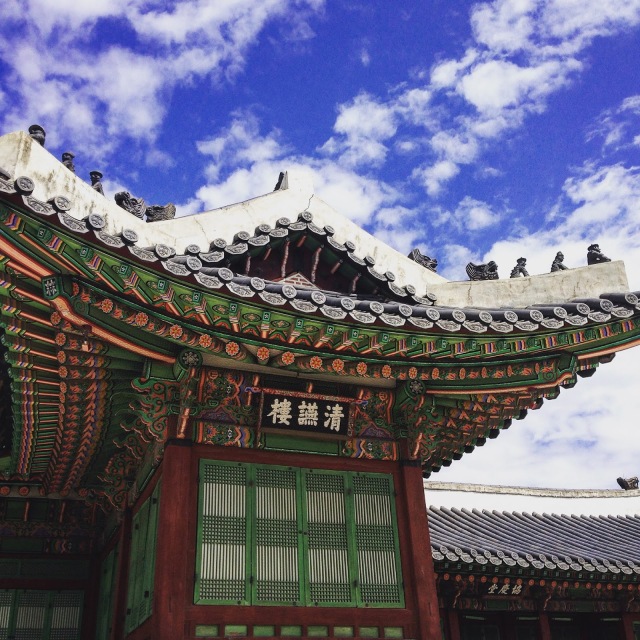 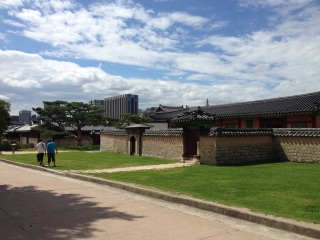 While there, I looked to find a few geocaches to place some travel bugs I had brought with me from Alaska. Our first cache location was a bit strange to say the least. 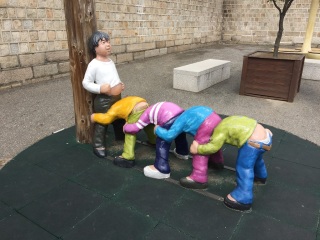 It also wasn’t large enough to put my TBs into, so I found the closest one that was large enough and we set off on foot through the city streets. Finding this cache was a unique challenge unto itself. It was nestled under a bench in an outdoor cafe on the fourth floor of a marketplace, and it took us quite some time to figure out exactly where it was. Both of us feeling frustrated, we finally found the proper floor and area we were looking for. After dropping the bugs in their new home and logging our finds, we were starving and exhausted from our day and headed for the subway to return home. Coming around a corner I laughed and pointed out a poop shaped waffle a vendor was handing a small girl. As I stopped to take a picture, Brian pointed out we were standing within arms length of the Poop Cafe.
Not long after Brian arrived in Korea I started sending him lists of things to do while he was there. I wanted to live vicariously through his travels as much as I could because I never dreamed I’d ever step foot in the country. One of the things, (along with the cat cafe) I stumbled upon in my internet search was the Poop Cafe – a poop themed coffee shop. It became a running joke between us about it for the next few months, so when were on the fourth floor of a random outdoor marketspace in the middle of a city of over 10 million people, and happened upon the place, we believed it was kismet. Neither of us had plans to actually visit the cafe, but when life puts you in certain places, you go with it. The universe had apparently chosen the Poop Cafe for us. (yes, I’m looking at you Carl Sagan, as I write this) 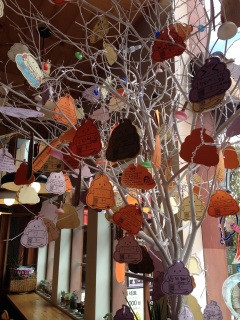 Our last full day in Korea was spent mostly on bus as we traveled from the base in Seoul where we were staying to the one Brian was actually stationed on. He had to be back at work the next morning and I on a bus to catch a plane. Before we crashed for the night I was able to tour the base, see where Brian was living while there, and explore the town immediately outside the base. No trip to Korea would be complete without some soju and viewing a few juicy girls, so that’s exactly how we spent our last night.

Thanks for the amazing birthday Brian. My first trip out of North America wasn’t too shabby.