July 14, 2013May 28, 2016
On Friday a friend told me she was sick. She’s been, like my roomie and many other folks, training for the Missoula 1/2 Marathon for many months. Knowing I am a slight running junkie, she asked if I wanted her bib # to run the race instead. Now normally I would of been joining everyone else in the fun, but in an effort to save some money(still trying for the whole, get out of debt thing by my 30th birthday thing) this summer, I opted to not run any organized races this summer. Despite that promise to myself, I had still been slowly chugging along in my running up until the point when I broke my arm on Cinco de Mayo. That brought not just running, but almost all physical activity, including dishes and housework, to a complete halt for several weeks. Just last week I boasted on Facebook that I had finally run my first 5k since breaking my arm. So when Becky asked if I wanted her bib, I considered my options, but there was no way I was going to turn down a free entry into a closed race.
Two days later, as I woke up at 3 am to sleepily chow down on the pre race meal I had prepared the night before and set on my night stand, I thought of the words of my friend Andrew. His philosophy to running is “if you can run 3 miles, you can run anything.” It’s all a mental game. At least that’s what I reminded myself before passing out for another hour.
My roommate Debbie and I boarded the bus while it was still very much dark out. As we pulled out of the staging station in downtown Missoula, I reminded myself that the only way I was getting back to that place today was with my own body and willpower.
Fast forward nearly two hours and the boom can be heard across the valley as 3,000 runners cross the starting line. 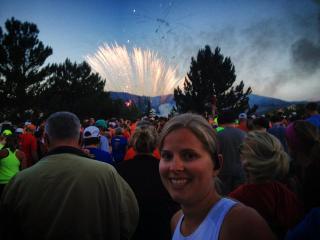 I was holding strong at mile 7 at a 10 min pace (pretty average for me, I never boast to be a fast runner) when I started getting that funny feeling in my knee right on que. Actually, for not having trained, I was impressed it had waited until that long to start acting up. The remainder was pretty touch and go. Walking when I had to, then running when the pain would subside a bit until it would give out on my again and I would find myself falling to the ground. 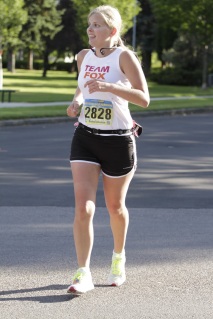 As I came across the Higgins Street bridge for the final .1 mile and neared the finish line the crowd started going wild. In my head I was thinking this was a much nicer applause than I had ever received in a race. What I didn’t know until she whizzed right by me only ten feet from the finish line was the lead female finisher for the full marathon!! It was pretty neat getting to cross the line with her as well as comical from my stand point. 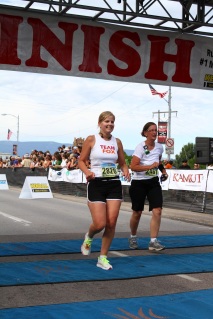 After downing half a watermelon at the finishers booth (somewhere along the race I had started dreaming about watermelon, not even knowing it was waiting for me at the finish line) I reconnected w/ Debbie and learned that I had actually BEATEN my time from last year that I had trained months for.

Although I will probably never train hard for another race ever again, I do believe my knee is telling me it’s time to start finding other sports to enjoy.

Did I mention I also was helping a friend DJ a wedding that night and had to promptly head home to shower and dress in formal wear? 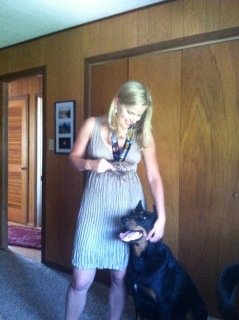 2 thoughts on “Missoula Half”

You don’t have a soul. You are a soul. You have a body.
Be the reason someone still believes in the goodness of people.
Listen, am I the most attractive gal out there?