My parents & my brother & his family flew into town on Wednesday. Thursday morning the boys took off for a fishing trip while I took my mom, sister-in-law and neice & nephew down to Jackson Hole, WY for a girls only (minus Ben, but since he’s not even one, he doesn’t count) tri
We took off early Thursday morning, but when traveling with two little ones even the easiest of trips takes a little time. We finally made it to Jackson later that evening & checked into our motel.

After a good nights sleep, it was time to get out on the town as we only had 1 full day to spend in Jackson. After breakfast we toured the town for a little shopping. Next I took Emily to the Elk Conservatory Visitor Center to earn her Junior Blue Goose Ranger Badge (see a previous post of mine from back in November). She passed w/ flying colors and we were down the trail to play around in the Grand Teton National Park.

Lola had never been there so we spend a better part of our day walking and driving around to see the sights. For those of you that have never been there, you should definitely add Jackson & the Tetons to your to do list.

Emily was more than excited to see our first animal, a barely visible moose playing in the brush of the river. She exclaimed, “I saw it’s belly aunt Holly!” She then proceeded to say we need to find at least 10 animals before we left the park to go back to our motel for the night. 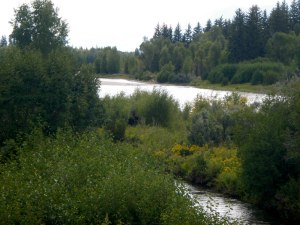 After driving around for half the day we had only seen what counted up to be about 8 animals, elk, deer, birds, horses, cows, moose, squirrels, and even some barely visible bison. Our stomachs were grumbling so we decided to call it a day and head back towards town (and food!). In a distant field I could see what looked like a herd of something so I decided it was only a short trip down a road to see what they were. We were all glad I did.

The herd of Bison completely surrounded our car. Mom was having flashbacks on an earlier vacation & was trying to remain calm (remember that one Kristen?!). Lola & I were snapping pictures as the bison stared us down & tried to figure out what we were doing there. Emily was most concerned for their safety, as they didn’t look both ways before crossing the road (cars were starting to pile up all around us at this point).  We stayed as long as we had to since they had our car surrounded & then took off for dinner. 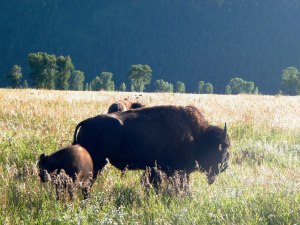 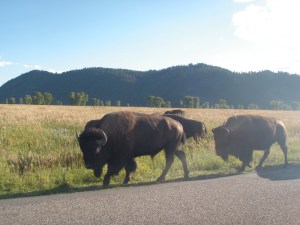 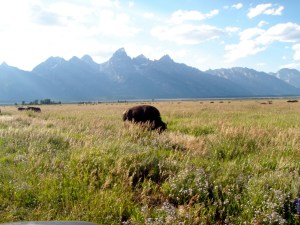 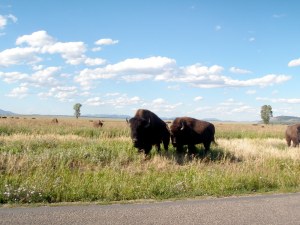 Missing my seester so much I drug my family to a restaurant named Bubba’s (a nickname for her step son, Jose Jr.) We wrapped up the night after a good meal, Lola & I did a little touring around town while momma gave the kiddos a bath & then everyone was off to bed.

When morning came we packed up the card & said our goodbyes to Jackson & the Tetons. It was time to tour Yellowstone.

Having two tiny travelers we had only time to stop at Old Faithful, the Middle Geysers, & the Painted Pots. If you have time to go to Yellowstone, these places are worth the stop. Finally we headed back to Missoula for the rest of their vacation, that’s for another blog post tho…

Be the reason someone still believes in the goodness of people.
Listen, am I the most attractive gal out there?
If the earth was flat cats would have pushed everything off of it by meow.